We at Simulanis are a multi-award winning XR Tech Company, working across a range of industries, and leveraging Augmented Reality (AR), Virtual Reality (VR), Mixed Reality (MR) and 3D simulationtechnologies to develop cutting-edge interactive, engaging and immersive products for learning and development.

As a hallmark of our journey so far, we are proud to have worked with some of the world's most respected and admired FTSE-100 and Fortune-500 Companies.

With our XR products and applications, workers can be exposed to high-risk jobs in a safe environmentwhich enhances their overall learning.

Since our inception, we have been recognized and rewarded for driving innovation,
growth and bringingpositive change in a disruptive manner. 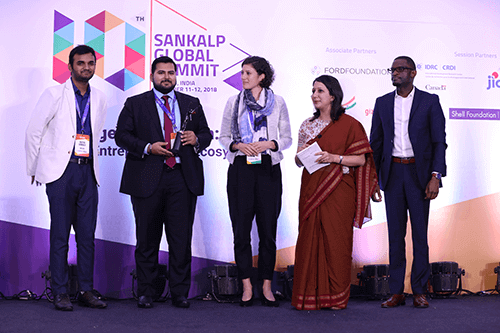 Simulanis wins the Sankalp Award 2018 in recognition for the most sustainable scalable enterprise. 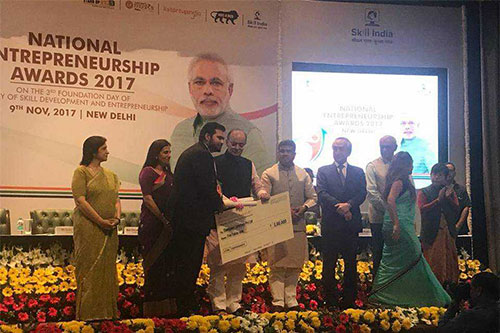 In Feb 2018, we were announced as the winner at Aegis Graham Bell Award 2017 in “Innovation in VR” categoryfor our innovation “VR for Industrial Training”, honoring the best innovation in the ICT domain in India.

In June 2016, we were named the Tech Business of the Year 2016 from ASSOCHAM India and were listedby PC Quest Magazine as one of the top Ed-Tech companies. 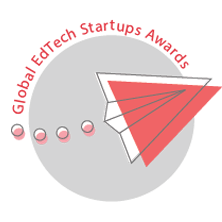 In December 2016, we were named as the Asia Region winner of the Global Ed-Tech Startup Awards (GESA)2016 competition and poised to face the world’s best in a final in London on 24-Jan-17

Recognition by MSME Goverment of India for Innovative Product offering

In August 2016, recognizing our innovative product offering, we were acclaimed by the MSME, Governmentof India and won a grant to further our work of revolutionizing learning, skilling and industrial training in India. 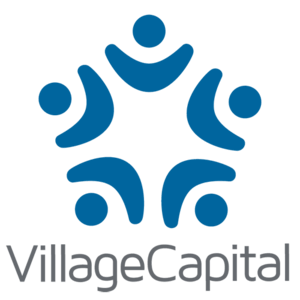 In October 2016, we emerged as runaway winners of Education India 2016, a unique program conducted by a US-based Venture Capital fund,Village Capital, in association with Michael and Susan Dell Foundation, as part of which they selected the 10 best education-focusedcompanies out of 200 across India.

In August 2017, we won IIM-Lucknow Noida’s Incubator competition out of 300 companies and were selected to take part in their Incubation Program.

Movers and Makers by the
Make in India magazine

In January 2017, our founder, Mr. Raman Talwar was personally Inducted as a part of an illustrious group of 40 inventivechange-makers and innovators, named ‘Movers and Makers’, by the Make in India magazine published by CONDE NAST India, strivingfor excellence and fuelling India’s ascent as part of the Make in India campaign across sectors.

Excellence Award from the National Science and Technology Entrepreneurship Development Board

In October 2017 we won “Start-up Programs for entrepreneurs in Oil and Gas Sector” award launched by Ministry of Petroleum & Natural Gas,Government of India.

In April 2016, we raised our first angel round, by winning a place in India’s 1st Education TechnologyAccelerator, EDUGILD, a MIT-Pune initiative, out of 400 other applicant companies. 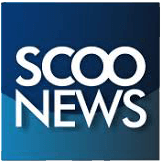 In March 2017, we were listed as one of the Top 50 Ed-Tech Startups Redefining Education in 2017 by ScooNews Magazine.

In May 2019, we won the award for being the best startup for developing VR for the Supply Chain industriesby NASSCOM CoE – DSAI& IoT.

In April 2019, we were honored and felicitated by Andhra Pradesh State Skill Development Council (APSSDC)for the pioneering work we have been doing to promote skill development in the state and setting up VirtualReality laboratories across the state. 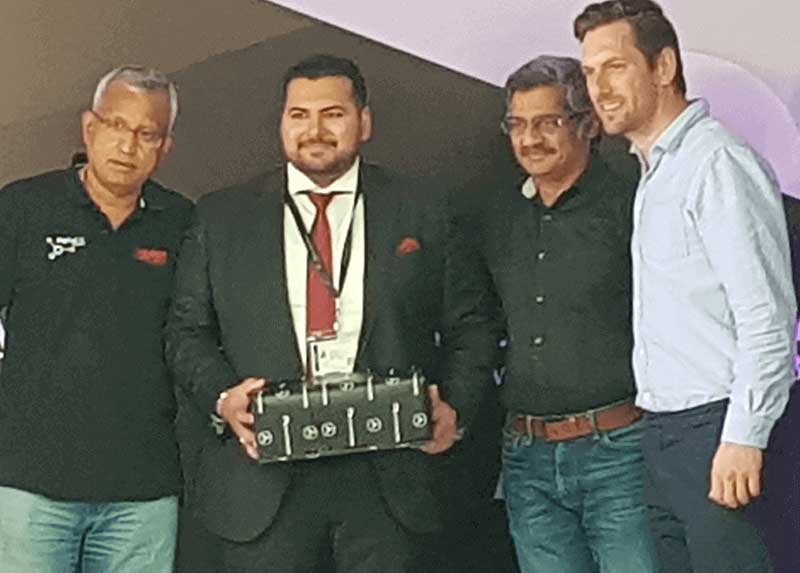 Simulanis won acclaim from Daimler-Mercedes Benz and secured a place in the Startup Autobahn competition – an initiative which allowed us to work with Mercedes and pilot our multi-award winning suite of AR field tools and technologies, with an aim of being ready for a successful production-ready implementation. 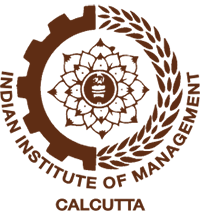 selected to be a case-study at IIM-Calcutta

In July 2018, we were selected to be a case-study atIIM-Calcutta for the PGP students as part of which thestudents would get to learn how we at Simulanis managed tobring about a digital transformation by leveraging AR-VR-MRtechnologies for some of India’s most admired businesses.

In August 2018, we were selected by Humanity United,a US-based philanthropic investment fund – part of theOmidyar Network, for a grant investment based on theimpact we create through our AR-VR-MR applications forindustrial training on the lives of blue-collarworkforce. 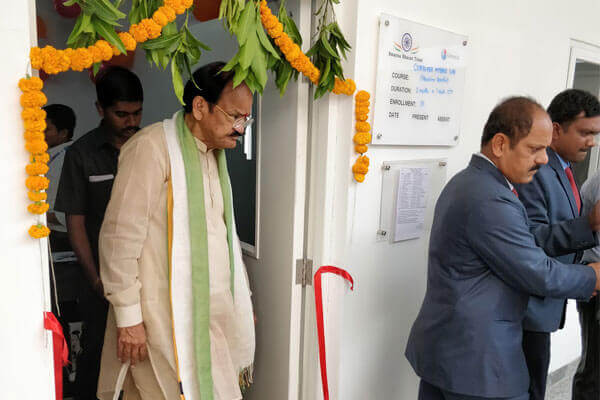 In Feb 2018, our first VR lab has been deployed atSWARNA BHARAT TRUST, Hyderabad which was inauguratedby Hon’ble Vice President of India. 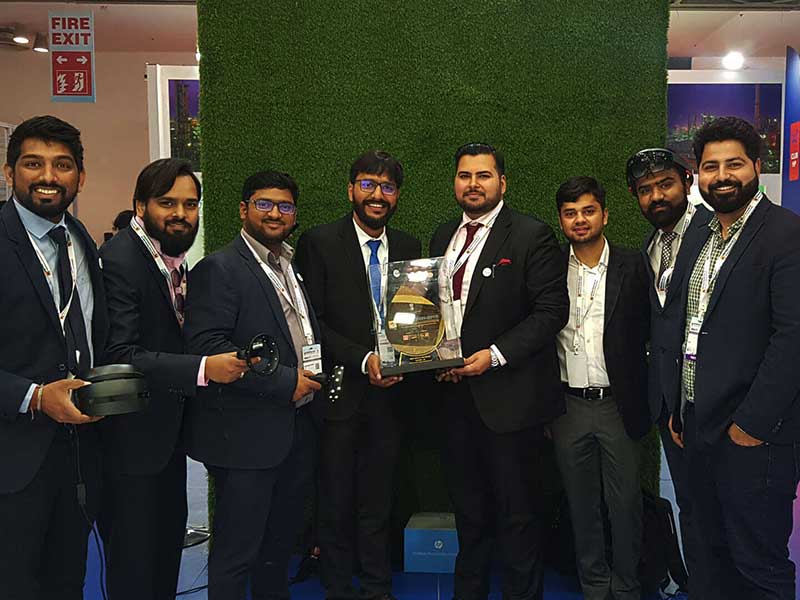 Simulanis in partnership with HPCL

Simulanis in partnership with HPCL at petrotech 2019.

In October 2017 we won “Start-up Programs for entrepreneurs in Oil and Gas Sector” award launched by Ministry of Petroleum & Natural Gas, Government of India.

From Hammer
to SCISSOR™

The Simulanis Customer Engagement Labs department is dedicated to deliver novel enrichingexperiences to help brands connect and engage their audience through the use of immersivetechnologies. 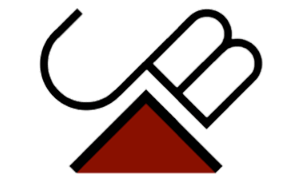 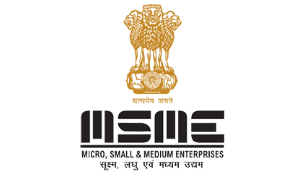 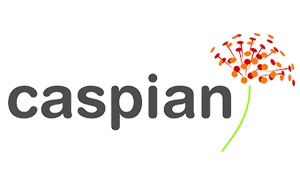 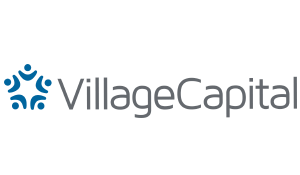 Get in touch for
Innovative XR solutions.

Our emphasis on quality and customer satisfaction is unparalleled and is the primary reason for our long and successful journey.